The exhibition is devoted to photography and presents its history form the moment of its inception. Apart from renowned authors and curators such as Erik Kassels or Loretta Lux, the audience will have an opportunity to view archival daguerreotypes, carte de visite which will be presented together with the contemporary amateur photos from Instagram or Flickr. In spite of the exhibition’s tittle statement “Photography never dies”, the idea of capturing still images has survived and it is better than ever – photography never dies!

THE STORY OF THE PAST AND THE FUTURE OF THE MEDIUM : Photography Never Dies in the exhibition dedicated to photography and its history. It is not an encyclopaedic or historical study but rather a metaphor and an illustrated story about the photographic medium. The presentation consists of photography icons from last 177 years, as well as archive photographs and contemporary amateur photographs from Instagram or Facebook. In addition to works of recognized artists and curators, such as Erik Kessels, Catherine Balet and Francesca Seravalle. Despite the death of photography as we know it, the idea of preserving reality on still images have survived and is flourishing better than ever, because photography never dies.

INTRODUCTION. The 3 series presented are from a collection of 10,000 photos. One of their distinguishing characteristics is the repetition of a detail, which creates a sense of strangeness that questions the source of feelings. The body of work tells stories to those who know how to listen to them. Jean-Marie Donat is an informed collector of photographs, which he has been gathering, for more than twenty-five years, during his journeys in Europe and the United States. The collection revolves around a powerful idea: providing a singular interpretation of the century. His photographs collection is subject of exhibitions throughout Europe and books in rare limited and unique edition.

« The art of assembly, montage, and juxtaposition assuredly creates connections between those images. The oblique gaze we cast upon them is the true constituent of the grouping that gives them significance, without which those images would remain dispersed, scattered, unknown, uncomprehended. »

BIOGRAPHY. Born in 1962 in Paris, France, Jean-Marie Donat has worked in publishing for thirty years. He contributed to the trendy Italian review ‘Frigidaire’ at the beginning of the 1980s, and was the studio manager and artistic director of Sarbacane Design for fifteen years, and participated in 2003 in launching les éditions Sarbacane. He now manages his own publishing company, AllRight. In 2015, Les Rencontres d’Arles is an occasion for him to launch Innocences, a publishing house dedicated to images of all kinds. 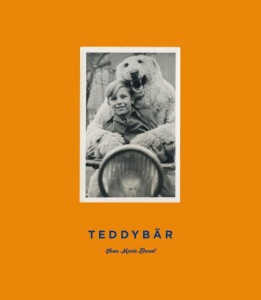 TEDDYBAR. These intriguing snapshots were taken by street photographers between the end of the First World War and the late 1960s. These prints were discovered by collector Jean-Marie Donat in various regions of Germany. Anonymous models pose next to placid, playful, sometimes disturbing polar bears: these bears traverse the decades, unchanged. The history of Germany unfolds.

« It is difference that intrigues us. More than multiplication, it is the multiplicity of bears and clients that holds the attention. […] we find, in this low art corpus, elements of the most sophisticated high art image structuring. Beyond the type of bear, the relationships formed during the shot, and rare, unexpected framings, it is our own perception of these photographs that must be examined. What does our spontaneous way of looking at these images teach us about our gaze? In short, this is an opportunity to perform an analysis, rudimentary as it may be, of how we see. » 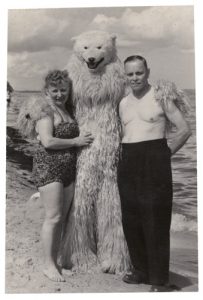 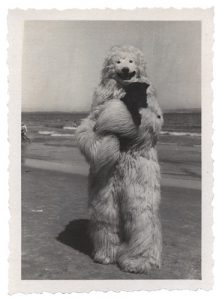 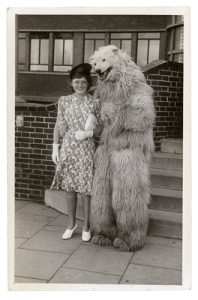 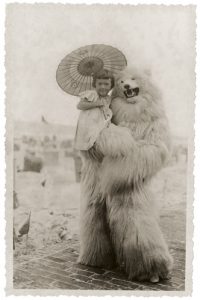 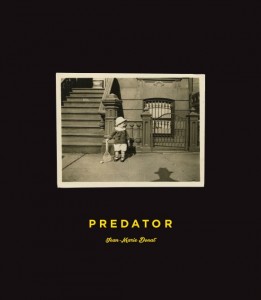 PREDATOR. These photographs were taken in the 1920s through the 1970s, throughout the world. They have one detail in common, which reminds us of the history of amateur photography: the shadow of the photographer. Donat appropriated this incongruity, choosing only images in which the shadow appears wearing a hat. The effect of repetition created by imagining this series becomes its subject: the same man looms, always and everywhere.

« As a similar shadow reappears in multiple photographs, this familiar apparition becomes, in fact, a familiar: strange, bizarre, disturbing, what is known in German as disturbing strangeness (Unheimlich), a non-familiar that nonetheless presents a familiar face, homely yet eldritch, an other that is still, somehow, known. […] We are thus given access to a sort of view from nowhere, as though the shadow were engendered naturally without the assistance of instrument or technique. This third gaze is found there, somewhere, in the shadow of its shadow. »

By Jacinto Lageira, Professor of aesthetics a Paris-Sorbonne and art critic. 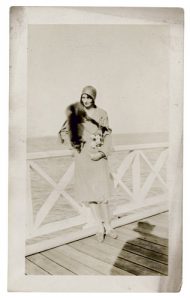 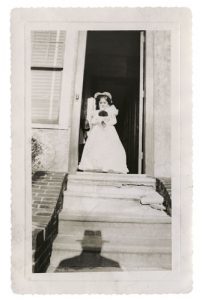 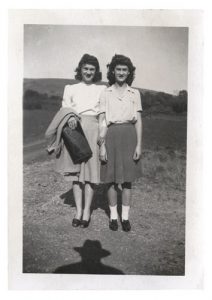 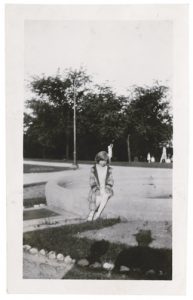 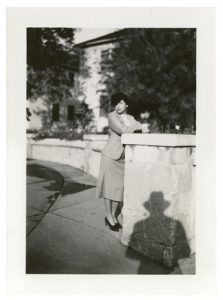 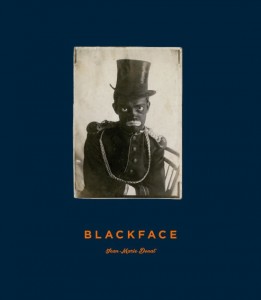 BLACKFACE. These photographs were taken in the United States between 1880 and the late 1960s. Some of them promote troupes of travelling performers: the minstrel shows in which whites made up as blacks incarnated, in musical numbers, the « good coloured folkâ” whose music Americans particularly appreciated. Other pictures are souvenirs from private parties, birthdays, or carnivals.

« To put on the face of the other is a primitive ritual that may release primitive emotions. M. Donat’s photographs take us to the dark side of reality, the mysterious side of ourselves, filled with desire to know who we are and to feel more deeply our hallucinatory reality, our pathetic delirium. But the racial dimension of being another is something beyond the scope of what we can grasp unless we accept that skin is merely a covering of a person’s soul, and that ultimately we are all the same. » 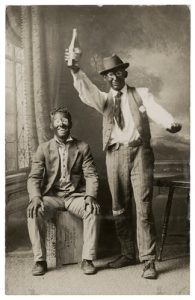 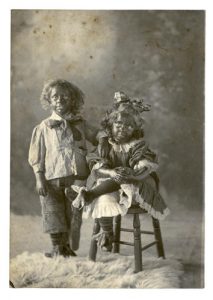 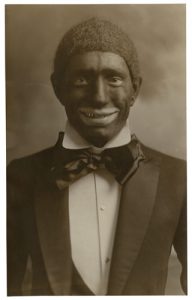 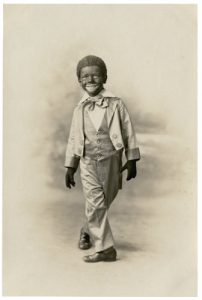 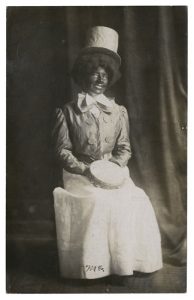 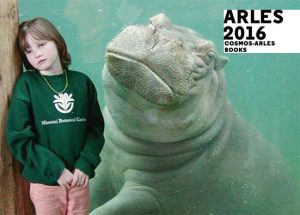 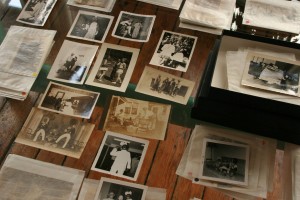 Le BAL invites Jean-Marie Donat for an informal discussion around his approach as a collector with art critics Jacinto Lageira and Klaus Peter Speidel. During this evening, Jean-Marie Donat will present few previously unseen series from his photographic collection. Also great collector of Jamaican vinyl records from the 60’s, he will play a selection of tracks to close this meeting over a drink at the Bal Café.

—
Le BAL, a space dedicated to the representation of the real through the image in all its forms: Photography, video, cinema, new medias. This is a space for exhibition, thinking and education dedicated to the image as a document.
Jean-Marie Donat, collector. Three series of his photographic collection was the object of an exhibition at Les Rencontres de la Photographie Arles 2015. From those series, 3 books have been published by Innocences in limited and numbered editions.
Jacinto Lageira, professor of aesthetics at the Université de Paris 1 Panthéon-Sorbonne and art critics.
Klaus Peter Speidel, philosopher, winner of the 2015 AICA France Prize for Art Criticism. 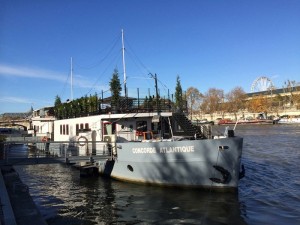 Parallel to the 19th Paris Photo Fair, the publishing house Innocences will participate in the Polycopies Book Market from nov. 11th to nov. 15th. It will be our pleasure to welcome you during those 4 days and present to you our latest collection ‘Vernaculaires !’ wich has been part of the Arles Photo Fair this summer.